Northwell Neurosurgeon First in U.S. to Use New Neuroendovascular Treatment for Brain Aneurysms 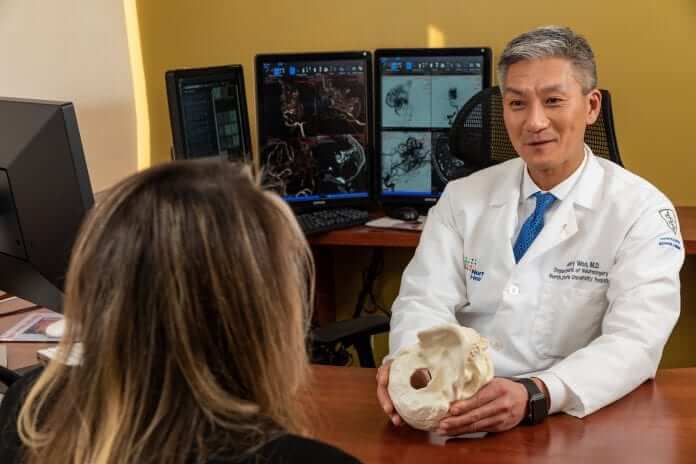 Northwell Neurosurgeon First in U.S. to Use New Neuroendovascular Treatment for Brain Aneurysms

A promising neuroendovascular treatment option is now helping neurosurgeons safely reach complex brain aneurysms with a single device deployed through a much smaller catheter, allowing for better control of bleeding, decreased length of surgery, and quicker recovery time for patients.

Elizabeth Munster, 59, from Baldwin, was the first patient in the United States to benefit from this new neuroendovascular treatment using MicroVention’s recently FDA-approved WEB 17 – a new addition to the WEB Aneurysm Embolization System to treat wide-neck brain aneurysms.

The procedure took place at North Shore University Hospital (NSUH) on March 2 and was performed by Dr. Henry Woo, cerebrovascular neurosurgeon and the hospital’s vice chair of neurosurgery. Woo is the first in the United States to perform two brain aneurysm cases using the WEB 17, both of which took place at NSUH.

The WEB-17, a cage-like device, is designed with the latest microbraid technology consisting of a dense mesh constructed from a large number of extremely fine Nitinol wires.

When placed in the aneurysm sac, WEB 17’s microbraid technology bridges the neck of the aneurysm, disrupts blood flow and creates a platform for long-lasting treatment. The technology offers a single-device treatment and smaller delivery system alternative to complex endovascular coils and stenting procedures traditionally used.

The major benefit of the WEB 17 is its ability to fit through a smaller catheter to treat different size brain aneurysms, from small to large.

“Some brain aneurysms are more challenging to treat with standard balloon-assisted or stent-assisted coiling,” said Woo. “In Ms. Munster’s case, she had a small, ruptured anterior communicating aneurysm. This made her an ideal candidate for the WEB 17 as it involves a single-device deployment to the aneurysm, as opposed to using several coils, stents or clipping. By using WEB 17’s smaller delivery system, we were able to safely reach the aneurysm and control bleeding.”

The minimally invasive neuroendovascular procedure requires the insertion of a catheter into the femoral artery in the leg, which is then navigated through the blood vessels into the brain where the aneurysm is located. The WEB 17 device is inserted through the catheter, deployed inside the sac of the aneurysm, closing off or occluding the aneurysm.

Previous clinical research of the WEB Embolization System has shown how it is highly effective, demonstrating 82 percent adequate occlusion and 98 percent occlusion stability at one year. In addition to excellent clinical outcomes, patients also benefited with faster procedure times and limited radiation exposure.

“Our cerebrovascular and endovascular neurosurgery team at North Shore University Hospital continues to be a pioneering leader on Long Island, the New York metro region and the country in the treatment of brain aneurysms,” said Dr. Thomas Link, NSUH neurosurgeon and cerebrovascular specialist. “We are delighted to have been the first hospital in the country to perform brain aneurysm surgery using the WEB 17 device, allowing us to offer patients the most cutting-edge advances in the field. In addition to Ms. Munster’s case, Dr. Woo and I have each successfully utilized the WEB 17 in two other patients whose brain aneurysms would have been difficult to treat otherwise.”